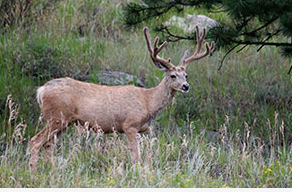 Despite the fact that Wyoming mule deer are a highly mobile species found throughout the state, University of Wyoming researchers discovered that mule deer in the state represent three different genetic groups.

“We identified features of the environment, such as elevation, habitat types and highways, that promote or inhibit the movement of mule deer genes across the state,” says Melanie LaCava, a UW Ph.D. candidate in the Program in Ecology and Department of Veterinary Sciences. “The environmental variables we found to be important were different at the scale of the entire state compared to each of the three genetic groups, which demonstrates the importance of studying wildlife in geographic areas of different sizes and comparing areas with different habitats.”

The study provides information useful to the Wyoming Game and Fish Department; federal land and resource agencies, including the U.S. Bureau of Land Management, National Park Service, U.S. Forest Service and U.S. Fish and Wildlife Service; nongovernmental organizations; and private landowners, says Holly Ernest, a UW professor of wildlife genomics and disease ecology, and the Wyoming Excellence Chair in Disease Ecology in the Department of Veterinary Sciences and the Program in Ecology.

“Knowing that mule deer in Wyoming represent three different genetic groups can inform management decisions, such as how to maintain habitat connectivity for mule deer across the state,” Ernest says.

Ernest was senior and corresponding author of a paper, titled “Functional Connectivity in a Continuously Distributed, Migratory Species as Revealed by Landscape Genomics,” that was published today (May 11) in Ecography. The journal publishes exciting, novel and important articles that significantly advance understanding of ecological or biodiversity patterns in space or time.

LaCava, from San Diego, Calif., was the paper’s lead author. Other researchers who contributed include Roderick Gagne, an assistant professor of wildlife disease ecology at the University of Pennsylvania; Kyle Gustafson, an assistant professor of biology at Arkansas State University; Sara Oyler-McCance, a research geneticist with the U.S. Geological Survey in Fort Collins, Colo.; Kevin Monteith, an associate professor in UW’s Haub School of Environment and Natural Resources; Hall Sawyer, a research biologist with Western EcoSystems Technology Inc. in Laramie; Matt Kauffman, unit leader with the Wyoming Cooperative Fish and Wildlife Research Unit; and Daniel Thiele, wildlife management coordinator with the Wyoming Game and Fish Department in Sheridan.

Mule deer populations have declined or fluctuated considerably over the past several decades because of a multitude of factors, including extreme weather, habitat loss and degradation, and predation.

The 10 environmental variables in the landscape genomic analysis were topographic features, such as elevation, slope and topographic roughness; land cover, such as proportion sagebrush, proportion forest and proportion grassland; rivers; and highways, interstate highways, and oil and gas wells.

The study spanned the state of Wyoming and examined lymph node samples from harvested mule deer from the fall hunting seasons from 2014-16. The study used samples, provided by the Wyoming Game and Fish Department, from 406 mule deer across multiple habitats in Wyoming.

The study also found that high proportions of forest promote gene flow, which could suggest that summer range habitat is important for genetic connectivity, as forested areas are more common in mule deer summer range. The western group had more mule deer that migrate than the rest of the state.

“Our data indicates that there is the most interbreeding in the central part of Wyoming. The three genetic groups of mule deer we identified represent the western, northern and southern regions of Wyoming but, at the center of the state, all three groups mix together,” LaCava says. “Mule deer in western and southern Wyoming are slightly more related to each other than they are to mule deer in northern Wyoming. It could be that the shift in habitat to the Great Plains, where mule deer are less likely to seasonally migrate than more mountainous areas in the west and south, accounts for greater differences.”

Highways were identified as a significant inhibitor to mule deer gene flow in the northern group. Most wildlife-vehicle collisions in Wyoming and across the western United States involve mule deer. GPS tracking studies show that highways and energy development significantly affect the behavior of both mule deer and pronghorn, Ernest says.

“So, it is interesting that we detected a negative genetic impact on mule deer, but we did not previously detect an impact of highways on pronghorn genetics,” Ernest says. “One possible explanation for the differences between mule deer and pronghorn is that, if a sufficient number of individuals can cross barriers in their habitats, survive and reproduce, then the genetics may not show major differences for animals living on either side of the barrier.”

“Human-constructed features like these are considered recent additions to the landscape when you’re thinking about long-term evolutionary history. So, detecting genetic evidence that highways and wells inhibit mule deer genetic movement is concerning,” LaCava adds. “In a previous study, we found no evidence of genetic differences on either side of a highway barrier for another Wyoming ungulate — pronghorn.”

Movement studies also show that mule deer consistently avoid energy infrastructure, especially in open sagebrush-grasslands habitat. The density of oil and gas wells was highest in the northern group by a large margin, according to the study.

Future research and management can consider how these three genetic groups differ in terms of other biological data, such as seasonal migration behavior or patterns of disease spread, LaCava says.

“By identifying which features of the environment are good or bad for mule deer genetic movement, managers can consider which habitat types are important to protect or which types of barriers could use modification, such as highway underpasses or overpasses, to benefit mule deer,” she says. “Managers can combine our genetic results with other information, such as seasonal migration data or disease spread, to make conservation decisions using multiple lines of evidence to most efficiently use limited funding and resources for wildlife management.”