Phosphorus (P) is essential to all life ranging from microorganisms, plants, and animals to human beings.

Our research demonstrates how dust inputs can modify the Walker and Syers model of P transformations in semi-arid environments.

Not all forms of P are available to biota. For example, highly weathered tropical soils are P-fixing soils where P is strongly bound to iron (Fe) and aluminum (Al) oxides and not readily available. However, phosphate bound to calcium (Ca) is unstable and readily dissolves to provide available P in acidic soils. To evaluate the availability of P in soils and dust deposited by wind (aeolian), we need to know the chemical forms of phosphate.

Phosphorus exists as multiple forms of phosphate in soils and aeolian dust, including organic phosphate and phosphates associated with metal cations, such as Ca, Fe, and Al.

Phosphorous bioavailability during soil development is not only controlled by the total P content in soils, but also by P chemical composition because different P types have distinct bioavailability.

The model also does not adequately consider the effects of wind-deposited (aeolian) dust to soils on P transformation. Dust deposition is ubiquitous in ecosystems, particularly for semi-arid and arid ecosystems that can receive massive dust contributions. In addition to terrestrial ecosystems, aquatic ecosystems, such as alpine lakes, are nutrient poor and receive significant aeolian dust.

Described below are our two studies on how aeolian dust inputs affect P transformations in a semi-arid ecosystem of northern Arizona and P availability of alpine lakes in the Rocky Mountains of Colorado.

Phosphorus availability in soils affects not only crop yield but also functions and properties of natural ecosystems. Phosphorous limitation strongly affects primary productivity, decomposition, carbon and N cycling, and biodiversity in an ecosystem. High P limitation could cause a terrestrial ecosystem to decline or stop progression at the very late stage of development.

Overall, this work provides a foundation for understanding how dust influences P cycling during soil and ecosystem development, and indicates that dust inputs and composition and the soil weathering rate must be considered for developing integrated climate biogeochemical models with predictive power in terrestrial ecosystems. 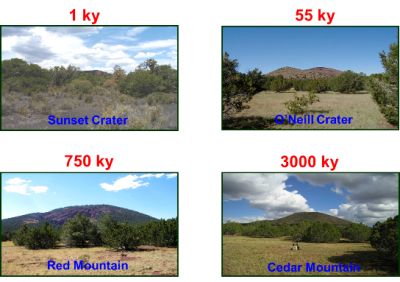 Surprisingly, we found the proportions of calcium-phosphorous (Ca-P) and iron plus aluminum (Fe+Al)-P fluctuated with increasing substrate age, not consistent with the Walker and Syers model. These soil fluctuations resulted from the accumulation and preservation of alkaline aeolian dust that contain mainly Ca-P during soil formation in the semi-arid climate, which significantly increased soil Ca-P while decreasing the total amounts and relative abundances of soil (Fe+Al)-P. We suggest the effects of aeolian dust input on soil P transformations are functions of the relative magnitude and chemical composition of the dust input and the soil weathering intensity (Figure 3).

For a given source of dust, when the net dust change is greater than the weathering rate, dust accumulates and alters the pattern of P transformations during soil formation; otherwise, the dust influence on soil P transformations is negligible.

Synchrotron X-ray techniques have been widely used in physical and life sciences, including soil and environmental sciences. The techniques are available only at synchrotron X-ray facilities in national laboratories, such as the Advanced Photon Source in Argonne National Laboratory, Chicago, Illinois, and the Canadian Light Source, Saskatoon, Canada. In a synchrotron X-ray facility, the X-rays of superior quality are produced when a group of electrons travel in a vacuum ring at a speed close to that of light. The X-rays are emitted at the circle tangent direction of the ring and are used as the light source to build a beamline station where samples are measured. Each synchrotron X-ray facility houses many beamline stations for different types of synchrotron X-ray techniques. X-ray absorption spectroscopy, such as P K-edge XANES spectroscopy, is one of the kinds. Different P compounds have different P K-edge XANES spectra. By linear combination fitting of sample spectra with spectra of reference compounds, one can determine P chemical composition in a solid sample.

Phosphorus can limit the primary productivity of oligotrophic (relatively low in plant nutrients and containing abundant oxygen in the deeper parts) alpine lakes due to the low P input from poorly weathered surrounding watersheds.

In such environments, mineral dust derived from dryland sediments is potentially an important P source, in particular when referring to alpine lakes at the margins of arid and semiarid regions, where dust mobilization and deposition are massive. The P supply from dust deposition can alter the nutrient composition, stimulate productivity, and shift bacterial abundance and phytoplankton-species composition in most alpine lake ecosystems.

The semiarid Colorado Plateau region is one of the main dust sources in the western U.S. Increased dust emission due to extensive grazing and prolonged aridity has increased P loading to nearby alpine lakes in the Rocky Mountain area. The pH of the alpine lakes ranges between pH 4.5 and 7.5 due to different degrees of lake acidification caused by elevated atmospheric nitrogen deposition.

We found Ca-P is dominant in 10 of 12 dust samples (41-74 percent) deposited on snow in the central Rocky Mountains and all 42 source soil samples (68-80 percent), with a lower proportion in dust probably because acidic snowmelt dissolves some Ca-P in dust before collection.

Iron-bound P (Fe-P, ~54 percent) dominates the remaining two dust samples. Dust releases increasingly more P in synthetic lake water within 6-72 hours thanks to dissolution of Ca-P, but dust release of P declines afterward due to back adsorption of P onto Fe oxides present in the dust. The back adsorption is stronger for the dust with a lower degree of P saturation.

This work suggests that P speciation, poorly crystalline minerals in the dust, and lake acidification all affect the availability and fate of dust-borne P in lakes.

The dominant Ca-P in the aeolian dust deposited to the lakes will be eventually dissolved by the acidic lake water and transformed to either soluble P or P associated with Fe and Al oxides. However, the Ca-P species will likely remain in the sediments for lakes with circumneutral (pH approximately between 5.5-7.2) or alkaline pH (PH 7-14). The efficiency of dust deposition as P fertilizer depends strongly on lake water pH. The ongoing acidification of alpine lakes in Colorado will further promote dissolution of apatite and the related release of dissolved phosphate and subsequent fixation by Fe and Al oxides as well, over decades or longer time periods. On the other hand, a recovery from acidification can have the opposite effect.