Sunn hemp (Crotalaria juncea) was grown for the first time in Wyoming in early July 2016, drilled into bone-dry powder in dryland ground at the James C. Hageman Sustainable Agriculture Research and Extension Center (SAREC) near Lingle.

Unfortunately, an end-of-July hailstorm upended the study, but not before we saw that, despite having no water, sunn hemp germinated and grew. That first experience, seeing sunn hemp grow in Wyoming powder, cemented interest in this alternative crop.

If it could survive in those conditions, what could it do with better management?

We have been testing the agronomic potential of sunn hemp since 2017 and have continued to see sunn hemp grow well, accumulating over a ton of biomass/acre in only 60 days of growth in dryland and irrigated systems.

Finding novel crops that can overcome these challenges and offer farmers a viable alternative to diversify their rotations is difficult.

What is sunn hemp?

Sunn hemp is in no way related to industrial hemp or marijuana. The crop is referred to as hemp because the stalks are very fibrous. Sunn hemp is a forage legume, meaning it has the ability to team up with soil bacteria to use nitrogen from the atmosphere instead of needing it supplied from fertilizer. It is a tropical crop, originating from India, which means it hates the cold and loves the heat. In Wyoming, sunn hemp should be able to grow from June through August. While three months may not seem like a lot of time, this crop can grow over 4 feet tall in that time.

Sunn hemp has many potential upsides:

First, as a legume, it has the ability to add nitrogen to a crop rotation, which means reduced cost of fertilizer for farmers.

Second, its rapid growth makes the crop a great option to fit into rotations or be used as a “rescue” crop if the primary crop is lost early in the season.

Third, the legume should have very similar feed value to alfalfa and should be a viable alternative or supplement to other feeds.

Fourth, sunn hemp is quite drought tolerant and may be an option for rainfed or deficit irrigated systems.

Sunn hemp sounds just about perfect – but nothing is perfect.

There are many questions we need to answer on both the crop and animal side of growing and using sunn hemp as a forage crop. Preliminary studies in 2017 and 2018 began to answer some of these questions, and during 2020 we will continue to test sunn hemp to evaluate its true potential for Wyoming.

Sunn hemp was grown at SAREC during the summers of 2017 and 2018 to determine the best planting time. We had irrigated and non-irrigated (rainfed) fields. We observed that sunn hemp is highly sensitive to too much water, especially in the first three weeks during establishment. This crop may be happier planted into powder than into a nicely watered field, which could be a real advantage to farmers in dry years or if they are trying to manage water allocations on their farms.

Both years we harvested sunn hemp biomass 60 days after planting (Figure 1). In the irrigated field (Figure 1a), the mid-planting yielded the highest biomass averaged over the two years, 2,820 lb/ac (Table 1). The late planting came in a close second, averaging 2,306 lb/ac, and the early planting had the lowest yield at 1,656 lb/ac. In the non-irrigated field, yield varied over the two years, which makes sense because of differences in amount and time of rainfall. The early and mid-plantings yielded higher in 2018 than in 2017, but the late planting yield was the same both years (Figure 1b). When averaged over two years, the planting time with highest rainfed yield was the mid-planting at 2,624 lb/ac, followed by the late planting at 2,151 lb/ac, and then the early planting at 1,615 lb/ac.

In both rainfed and irrigated conditions, the mid-planting time produced the highest yield, indicating this may be the most reliable time of year to plant sunn hemp in southeastern Wyoming. Even more interesting is that there was no significant difference in yield over the two years (Table 1).

How does sunn hemp measure up?

According to USDA-NASS, the average alfalfa yield in Wyoming for the last 10 years was 5,460 lbs./ac. While this is much higher than our highest yield of 2,624 lbs/ac, alfalfa is a perennial, full-season crop that has multiple cuttings and takes a long-term place in a crop rotation.

Meanwhile, sunn hemp is producing its biomass in a two-month period, meaning it can fit into narrow rotation windows and allow producers to intensify their rotations with winter crops like rye, brassicas, winter pea, wheat, and others. Additionally, alfalfa is not a crop that can be used as a replacement in the event of crop failure, while sunn hemp could fit well. 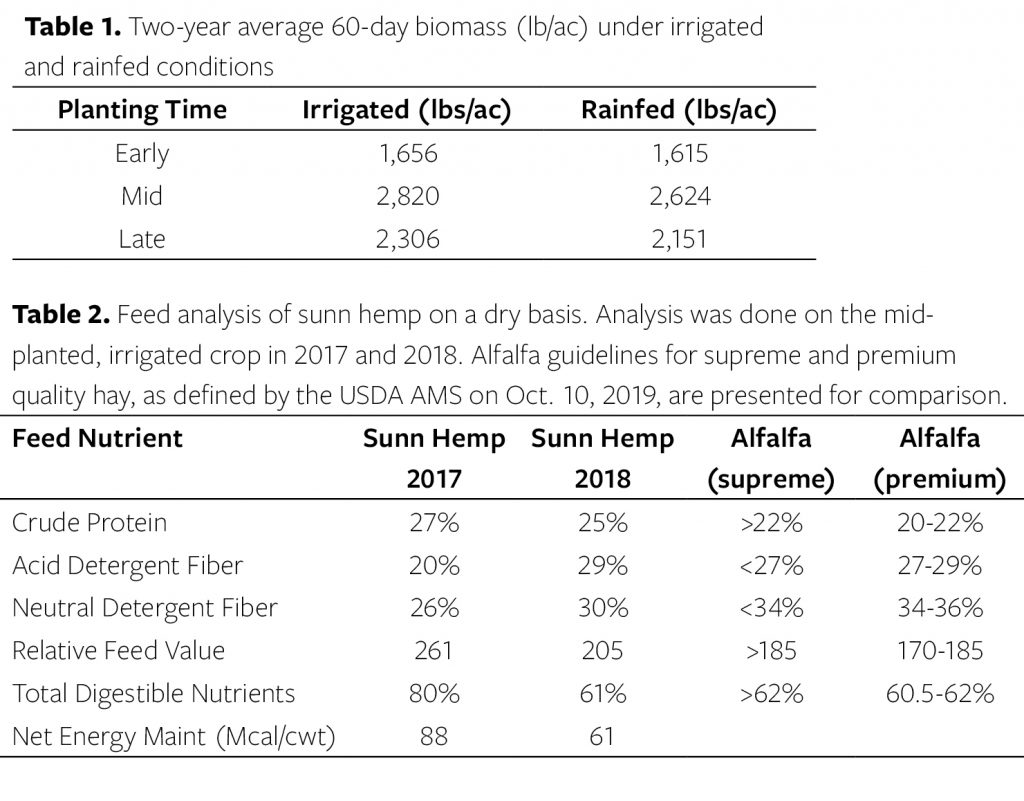 Is sunn hemp the next crop for Wyoming?

We hope to have a solid answer by the beginning of 2021, but for now the crop is performing very well. The short growing season is not a problem for this rapidly growing crop. Our hot, dry summers only promote its growth. It does not get planted until June and avoids wet field conditions in the spring. Sunn hemp will fit into the same market as alfalfa, and you can already get seed from a number of local co-ops in the state. Sunn hemp seems to be a good fit as far as the challenges of growing in Wyoming.

There are still many questions to answer. We know sunn hemp should ideally be planted around June 5 and that it can produce over a ton of biomass in 60 days with alfalfa quality feed value. What we don’t know are answers to some of the more intricate production questions, like:

What is the ideal target population for an irrigated and a dryland crop?

How do we harvest on a large scale?

What is the best time to harvest for maximum yield and feed quality?

How much water does the crop need?

Will it re-grow after it has been cut?

Will livestock eat it?

How much of it is digested?

We will be trying to answer some of these questions over the next few years. A new sunn hemp study was initiated in 2019. Our team will combine our expertise in crop and animal science to provide growers with best management practices for this crop.

Author: Carrie Eberle, Assistant Professor, Department of Plant Sciences. Eberle can be reached at (307) 837-2000 or carrie.eberle@uwyo.edu.