Prairie dogs woven into Thunder Basin Grasslands Ecosystem detrimental to ranching if too many, but too few and dependent wildlife disappear.

Black-tailed prairie dogs are one of the most charismatic and conflict-ridden critters you will ever meet. 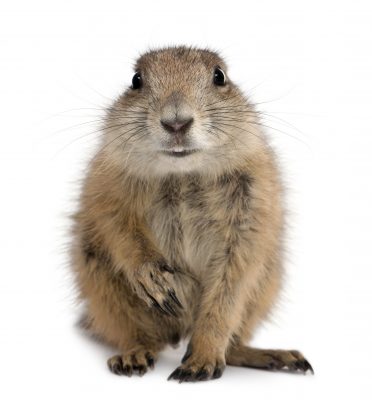 Their charisma comes in part from their volume (in numbers and decibels). A social, burrowing mammal, prairie dogs are extremely gregarious and loud, barking constantly to warn others in their colony of potential intruders.

Managing prairie dogs on landscapes meant to sustain both livestock and wildlife is a large challenge. Our piece of the puzzle is examining how prairie dogs affect bird species in the Thunder Basin National Grassland.

Because they occur at such high densities, prairie dogs are an important food for ferruginous hawks and golden eagles, species of concern in Wyoming. Burrowing owls, another species of concern, get their name from living underground in burrows created by other animals – and they are more than happy to take up residence in a prairie dog burrow.

In addition to being a food resource and digging burrows, prairie dogs also clip vegetation near their burrows to ensure they can see predators. This clipping creates perfect habitat for a lesser known bird species, the mountain plover. This small brown inland shorebird prefers short vegetation and lots of bare ground so it can see predators and blend in – in many parts of its range, plovers are only found if you look on a prairie dog colony!

That prairie dogs are so important for so many birds (as well as mammals, including the swift fox and the endangered black-footed ferret) makes them a “keystone species” – a species upon which many other members of an ecosystem depend. The disappearance of many other wildlife species is observed if keystone species are removed.

Keystone species are often the target of conservation efforts, because by protecting one species, you can protect many. Prairie dogs, and especially the black-tailed prairie dog, have declined precipitously in the past century, making them a conservation target throughout the Great Plains.

Black-tailed prairie dogs are an important keystone species, but they can also spell trouble for a rancher. Especially in dry years, prairie dogs may clip or consume vegetation to the point not enough is available for livestock. This can lead to reduced cattle weight gains and economic losses, which is why prairie dogs are controlled throughout much of their range.

Millions of dollars have been spent researching how to control and kill prairie dogs, but at least as much has gone toward reintroducing them and preventing disease in other parts of their range, especially to help other associated wildlife like the black-footed ferret, which almost went extinct due to prairie dog declines.

The Thunder Basin region represents a great opportunity for bird conservation, but one challenge is understanding how we can have enough prairie dogs to provide habitat for those bird species while making sure cattle ranching is still profitable. Because some of the colonies in this area grew to many thousands of acres in size in 2016-2017, it’s very literally a “big” challenge – no other known colonies currently reach these sizes.

Between 2015 and 2017 we surveyed birds and vegetation in the region to determine which birds were using prairie dog colonies and what traits of colonies were most important for these bird species.

We found mountain plovers (that little brown shorebird that likes bare ground) were less abundant on very large colonies and were actually most abundant on medium-sized prairie dog colonies with short vegetation and lots of bare ground. These colonies were still fairly large (between 250-1,235 acres each), but we found birds seemed to prefer parts of colonies fairly close to undisturbed habitat – perhaps because these areas provided cover for their chicks.

Areas on the largest colonies (up to 9,900 acres) had fairly low bird diversity as compared to smaller colonies. To conserve diverse bird species, managers may want to aim for many medium-sized colonies – potentially using non-lethal methods like visual barriers or moving them to other locations to keep colonies from getting too large. By ensuring colonies aren’t too large, this also ensures enough forage for livestock – a win-win on public lands.

More moderate-sized prairie dog colonies are likely the best strategy for balancing bird conservation and cattle – but there is another reason to avoid having extremely large colonies in the landscape. Colony size has been linked with increased chance of sylvatic plague. Although only rarely contracted by humans, this disease can kill up to 95 percent of the prairie dogs in a given landscape, which has huge implications for associated wildlife species.

At least 90 percent of prairie dogs in the Thunder Basin died during a plague outbreak in 2017 (sidebar, page 29), although ascertaining the total mortality from the disease is difficult. In the following year, mountain plovers virtually disappeared from the landscape because vegetation became too tall. Conversely, other species that like taller grasses, like the lark bunting, were abundant. These are exactly the effects we would expect to see after the removal of a keystone species.

Although plague had extremely negative impacts in the short-term, remembering that grasslands are inherently ecosystems of change is important. They evolved for thousands of years with disturbances like fire, bison grazing, and prairie dogs – disturbances that may be present one year and gone the next.

Just as the vegetation recovered, so to, little by little, did the prairie dogs. While in 2018 individual prairie dogs were still scattered, in 2019 they began to coalesce into very small (less than 2.5 acres) colonies. These were the main areas where we started seeing mountain plover again – in some cases, we could tell using color bands these were the same plovers that had nested there up to four years prior. We don’t know where they went when conditions were poor in 2018 – but they came back.

These extreme boom-and-bust cycles have negative ramifications for ranchers and prairie dogs and for the other wildlife species in this landscape. Even with disease control methods such as killing fleas that carry plague, disease is likely to continue to be a part of this ecosystem.

One potential way to minimize the boom-and-bust cycle is to focus on keeping many moderate-sized colonies in the landscape.

We are excited to see how others add to this research in the future – neither the conflict nor charisma of black-tailed prairie dogs is likely to decrease anytime soon, but hopefully additional research will help balance perspectives on this amazing keystone critter.

Early effects of sylvatic plague on the Thunder Basin ecosystem

In late summer of 2017, prairie dogs in the Thunder Basin began contracting sylvatic plague (Yersinia pestis). Although this disease is not native to North America, it has affected prairie dog populations for decades, and often leads to drastic (>95%) fatality.

In just one year, the effects of this die-off were staggering: panels A and B show a camera trap photo at the same site in late May 2017 (A) and 2018 (B). Vegetation is noticeably taller and denser, with an almost complete elimination of bare ground.

These observations are reflected in the data which show that visual obstruction (a measure that captures both the height and density of vegetation) was much lower on colonies until plague. After plague occurred, visual obstruction increased in 2018 and in 2019 was statistically the same as areas that had never had prairie dogs.

Because prairie dogs are a keystone species, it’s not surprising we saw other things changing, too: mountain plovers and some raptor species decreased precipitously, while some bird species that prefer thicker grasses increased.

The University of Wyoming Extension publication Prairie Dog Ecology and Management in Wyoming, B-1346, discusses the complex relationship between prairie dogs, humans, and the Wyoming rangeland landscapes they inhabit. The free publication is available for viewing or download by going to uwyo.edu/uwe and clicking on Publications. Enter the title or number in the search field.