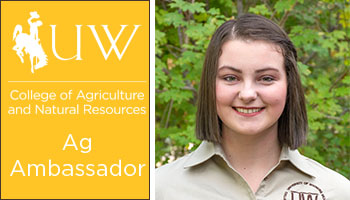 People ask me all the time why I moved 1,307 miles away from where I was raised, for which I tell them all the time, “Why not?”

I definitely play it off as pure confidence and as an act of strong will and faith, but truth be told, it was one of the scariest things I’ve done in my life. I toured UW when I was a junior in high school, and at this time I was pretty much set on going to the University of Alabama in Huntsville, a school about two hours away from home. But I figured it wouldn’t hurt to see what was out west, so I convinced my mom to bring me out.

As soon as I stepped off the plane in Denver, I knew that something was about to change, but I just credited the new feeling to the elevation. So, we drove up, and the first thing we did in Laramie was drive around campus. I remember thinking how tall the trees were. I had my tour and met a few professors; we even drove out to Hansen to take a look around.

I knew that I was home the moment I stepped onto campus.

But I was now plagued with the task of telling my mom that her oldest child didn’t only want to move away for college, but to another time zone completely. I think she already knew the answer before she asked the question, but as soon as we got back to the hotel, she asked me what I thought of the school. I told her that I liked it but that it wasn’t UAH and she dropped the conversation. The next morning when we were getting ready to leave, I asked her how she would feel if I went to school this far away. She didn’t just give me an answer, she gave me freedom—“I love you. You go to school where you will be happy.”

I applied to UW the second week of my senior year and was accepted two days later. This was about six months after my trip to Laradise, and I had definitely lost some of my nerve. I had told many people my plans and had been the receiver of many judgements because of them. I was tired of people turning their noses up at me and laughing when I said that I was actually leaving my hometown.

So, I toured one more school. I stepped on that campus, saw some friends that I went to school with that had graduated already, and faked my smile. I went home that afternoon to many hopeful family members. So, I told them I changed my mind, that I was going to the college in-state. Well now, we all see how that decision turned out: in the garbage. It took a few months, but I realized how unhappy I would be if I stuck with that choice; it wasn’t a bad school, but how could I move to a place that wasn’t home when I knew that I had one?

I had been having doubtful thoughts for weeks at this point, but the thing that really flipped the switch in my mind was talking to a teacher who used to be at my high school. She told me how she chose her school and that she knew she wouldn’t have been happy somewhere that didn’t feel like home. I knew that I had to go home. I wanted to tell this story not to make readers sympathetic, but to give future college students a bit of advice: don’t be afraid to go home.

I knew I was home the moment I got here, but I was terrified of disappointing my family by leaving. I always knew I wasn’t going to live in Lawrenceburg, but I never thought I would end up in a place like this, or that I would have so much support. Not only do I still have my family behind me, but a whole new network of people who I have met since taking the leap.

It took me a while to be okay with being on my own, but I can honestly say I found home and made it mine. There is such a close community here at UW and within the College of Agriculture and Natural Resources especially. I have found my people here. I am thriving here. I am home here, and I never would have made this life for myself if I had stayed afraid.