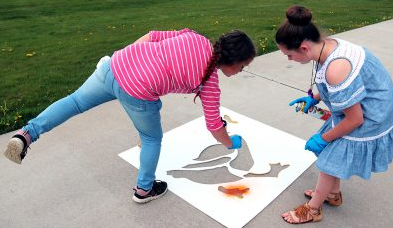 Playing outside is not as common as it used to be for kids. Games like hopscotch and Simon says have been set aside as kids have become less active. The Cent$ible Nutrition Program (CNP) and its community partners are working to change this in Wyoming through sidewalk stencils. The stencils in Evanston are the latest addition to this project.

It’s the last day of school in Evanston, and summer is in the air. Students and their families gather around town to enjoy lunch and the start of summer. For some, their summer celebration begins at the Bear River Greenway. The celebration? Spray and Play, an afternoon of lunch and painting sidewalk stencils along the greenway.

It’s a beautiful afternoon for the end of May in Wyoming. The Cent$ible Nutrition Program and Evanston Parks and Recreation District (EPRD), which partnered for the event, could not be more pleased. Working with Wyoming’s weather is one of the biggest challenges for painting the stencils and it seems Evanston got lucky.

As the clock nears 1 p.m., kids and families gather at the Community Center and Pavilion along the greenway. Steve Liechty, Recreation Division manager with Evanston Parks and Recreation, fires up the grill for a barbecue lunch. Kids from preschool to middle school settle onto picnic benches and the afternoon gets started.

The Bear River Greenway follows the Bear River through Evanston, providing over 2 miles of paved trails. At the main entryway, there is a new Health Trail Fitness Course. The course includes 14 fitness stations for adults. While the trail and fitness course encourage adults to be active, there are no kid specific activities.

“There are a number of people who access this [area] daily and we’ve got some new exercise equipment,” said Marilee Jackson, business manager for Evanston Parks and Recreation. “But, we don’t have a lot for kids because we never put a playground over here and we probably won’t. But, with that said, stuff on the sidewalk would be great!”

The sidewalk stencils provide a low-cost option for kids’ activities without a huge commitment from community partners. Additionally, painting the stencils as a community helps create more excitement about using them.

Six sets of stencils were purchased by the Wyoming Department of Health as part of the CDC’s State Public Health Actions grant (1305). When the grant ended, CNP agreed to house the stencils in UW Extension offices around the state. Evanston is the newest community to use stencils, which were brought down from Pinedale where this set is housed. Bear River Greenway is the seventh stencil site in Wyoming.

The stencils at the Bear River Greenway are unique because they are in a park setting. In other Wyoming communities, the stencils have been painted at schools and daycares as part of other CNP projects. The idea to paint them at the greenway, a public space, came from Uinta County CNP educator Beth Barker.

“I just had this thought that we have this really nice greenway and there are activity stations for adults along the path,” said Barker. “And, I thought it’d be great to have activities for kids to do while their parents are doing the adult activities.”

Through community contacts and some perfect timing, Barker connected with the board of the Better Environment and River (BEAR) Project Inc. Barker and Kim Proffit, the Uinta County Public Health Nurse manager, presented the stencil idea to the board on March 20. The project was approved shortly afterward.

With the stencils, some of this is about to change.

As lunch comes to an end, anticipation hangs in the air. Cody Webb, with the Evanston Police Department, talked a little during lunch about using public spaces. He explained when it is and is not OK to paint the sidewalk. Getting kids involved in the process gives them some ownership of the stencils. EPRD is hoping this ownership will help prevent destruction of the stencils. This is one of the biggest concerns for this project because the greenway is tucked away from town.

Explanations finished, everyone is ready. With a few quick instructions from Jackson, everyone heads toward the greenway entryway parking lot.

A loop of sidewalk surrounds the open green space here. The exercise equipment for adults shines in the afternoon sun. Everyone gathers on the sidewalk bordering the parking lot. Barker and Jackson pull out the huge stencil boxes from the truck bed. Kids of all ages start pulling on plastic gloves and masks. Nicholas Winn, a custodian at the Evanston Recreation Center and an artist, shakes up a can of spray paint. It’s time.

The first stencil to go down is hopscotch. Everyone gathers around the stencil. Winn offers a few tips on how to use spray paint on the stencils. He demonstrates the constant movement and proper distance for even coloring. Barker shows how to use extra cardboard to cover parts of the stencil. Armed with information and cans of paint, the group divides.

Storm clouds begin to brew on the horizon as groups take stencils and lay them out along the path. One family focuses on a frog as the sky gets darker. A group of middle school boys gets creative with the Mirror Me stencil. Jackson looks upward, keeping an eye on the storm that seems to be going south of the greenway. We cross our fingers that the rain waits and carefully touch the newly painted stencils. They are almost dry.

The afternoon winds down and the stencils are packed away. The storm has kept its distance, and our work is just about complete.

“The idea is to just go outside and play, it doesn’t have to be this big, organized, structured thing,” Jackson said of kids being active.

And her words could not be more true this afternoon. The stencils have hardly dried before kids start playing hopscotch, their parents showing them how. Mirror Me draws a crowd as the middle school boys play.

Jackson looks at the path with satisfaction. Two hours earlier, it was a line of grey cement. Now, 13 colorful stencils draw the eye and beg to be used.

As everything was packed up and families began to head home, Jackson noted this project isn’t over. Nothing is set, but EPRD is eager to paint more stencils after seeing how this initial set works.

“We’re excited,” Jackson said. “We just threw this together kind of last minute. We thought, ‘let’s feed them and then get them here, then go see what we can do.’”

Additionally, Barker and Jackson plan on posting signs next to the stencils with instructions on how to play the games.

CNP is funded by the USDA SNAP-Ed and EFNEP, and is part of the University of Wyoming Extension. This stencil project was funded by SNAP-Ed. CNP provides nutrition education to individuals and families with limited resources. CNP also partners with community organizations serving populations with limited resources, to help make the healthy choice the easy choice for everyone. To find out more, visit www.uwyo.edu/cnp.