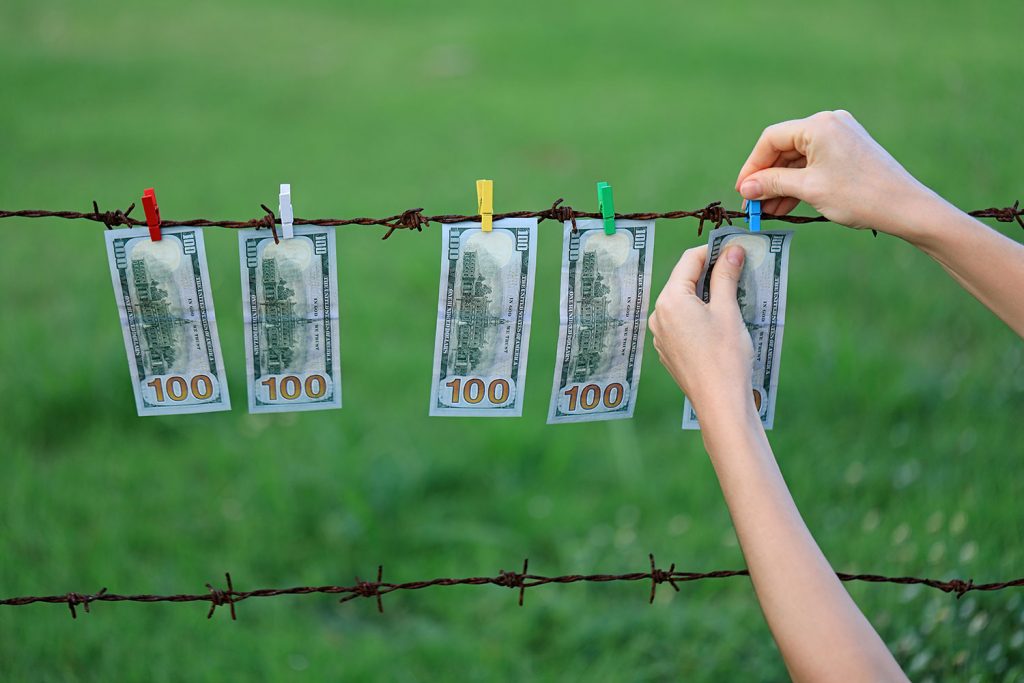 It’s not that professors in the Department of Agricultural and Applied Economics at the University of Wyoming are involved in money laundering, but they are — sort of.

Economists Chian Jones Ritten and Chris Bastian, and their partner, Professor Emeritus Owen Phillips in the College of Business, shouldn’t have to worry about FBI agents bearing handcuffs on the UW campus this holiday season.

But policymakers directing money laundering enforcement might be interested in the three’s research into the best ways to reduce illegal trade.

Their findings, published in the research journal PLOS One in November, suggests concentrating law enforcement efforts at the point of sale is more effective to reduce illegal market activity than seizing laundered profits. Their article, “The relative effectiveness of law enforcement policies aimed at reducing illegal trade: Evidence from Laboratory markets” is at https://bit.ly/illegal-markets.

Their economic laboratory experiments showed illicit trade is reduced nearly 32 percent when law enforcement is focused at the point of sale. Oversimplified, but think of the Wyoming Highway Patrol seizing illegal products en route to a deal or market.

“Given all of the emphasis currently on policy addressed at money laundering and stopping money laundering, I was somewhat surprised we found that law enforcement aimed at money laundering is really not that effective,” said Jones Ritten, an associate professor in the department. “But, when we thought about it from an economic perspective, that wasn’t surprising at all.”

Phillips had received training on investigating money laundering and approached Bastian about the topic.

“It really started out more focused on money laundering but, between Chian, Owen and me, it grew into a broader topic on policy looking at illegal products,” said Bastian, a professor in the department.

Those markets could include illegal drugs, organs, wildlife and even fraudulent food products.

Their prior work had already studied factors that affect privately negotiated or less developed markets. The new work was an extension of how people negotiate and the outcomes they expect, said Jones Ritten.

“If there are risks of law enforcement, how does that effect behavior?” asked Jones Ritten. “So it might sound really out there, but it really is similar to the lab work we’ve already done. What we’re really thinking about is on a much larger scale, large producers who may have entities in many countries and many regions. And so we’re talking about large scale buyers and sellers of these illegal markets.”

Thirty-six lab experimental sessions had 288 participants bargaining along the production-trade-laundering cycle with a risk of seizure at various points.

“We had to assign what the risk was,” said Bastian. “There is no empirical evidence to tell us what the rate of seizure actually is.”

They assigned a 20 percent chance of being caught.

“I think the question in the real world is, is that 20 percent above or below what we actually see in these product markets? And that’s data we just don’t have,” said Bastian. “But I think the reality is, if you were somebody involved in that market, our research points to if we can give you the perception the risk is relatively high, that may alter your behavior.”

He joked he wasn’t going to conduct field research to find out.

Results showed behaviors in the market were not what models suggested. The 32 percent reduction was surprising.

“The magnitude of the reduction in trade is what was really different,” said Jones Ritten. “We found that law enforcement in these areas was much more effective than theory alone would have predicted.”

People respond to these risks in a much more drastic fashion than models suggest, she said.

“Their objective is to reduce the trade and production, and we found that these risks associated with these types of markets and law enforcement create a larger reduction than we had originally thought,” she said.

Turns out criminals react the same to the risk of their products being seized as having to pay taxes.

“After we started looking at results, in my mind, it started to fall in line with research in other areas related to taxes and how people respond to those types of costs when they’re doing business,” Bastian said.  “They start looking at the tax as a cost of business.”