Brucellosis can cause elk, bison, and cattle to abort their fetuses, associated with a high risk of transmission after an animal has an abortion. 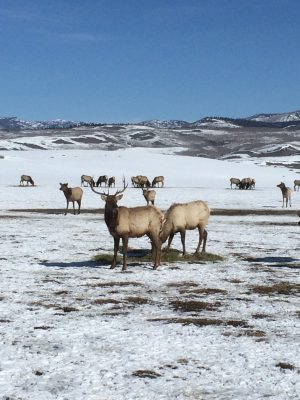 Most of the U.S. is now free of bovine brucellosis due to a decades-long eradication program; however, the disease is endemic in bison and elk in the Greater Yellowstone Area (GYA) and occasionally spills over to cattle herds.

Brucellosis vaccination has been an important part of the program to eradicate disease from domestic cattle. While vaccination of cattle with B. abortus strain RB51 does reduce abortions, it does not necessarily prevent infection. Also, currently available vaccines are not appropriate for use in bison or elk.

There are many other species of Brucella that are important to consider. B. melitensis, for example, is found in sheep and goats throughout the world, and this particular species can cause severe human disease. There is no effective vaccine available for B. melitensis.

UW scientists have applied modern molecular methods with the ultimate goal of producing a vaccine that would protect more than one species of susceptible animal hosts against Brucella.

For over a decade and a half, efforts to determine the molecular mechanisms that drive Brucella species to invade and potentially produce disease in mammals has been studied in numerous laboratories around the country, including the University of Wyoming.

These microorganisms have a propensity to colonize their animal hosts, survive for long periods of time, and remain dormant. Persistent bacterial infections in mammals abound, such as Yersinia enterocolitica (chronic gut colonization in elk), Mycobacterium tuberculosis infections (in humans and elephants), and Helicobacter pylori, the bacterium that causes human chronic gastritis/peptic ulcers, to name a few.

With the premise that the characteristic hallmark of B. abortus invasiveness (as well as other Brucella species) in mammals is persistence (chronic infection), the ideal pathogen would not necessarily cause disease. Epidemiological studies on B. abortus bear this out, as it has been difficult to numerically correlate pathologic outcomes with B. abortus infection in natural host populations (domestic animals, such as cattle and/or wild herding animals [elk]) .

2005 — Use of in-vivo-induced antigen technology

At a molecular level, persistence is likely facilitated by a number of virulence-associated molecules expressed by the pathogen. These are likely to include surface-exposed, bacterial cell wall proteins and secreted/released soluble enzymes. Research began at UW in 2005 to develop an improved vaccine that produces immunity targeting such virulence components.

At the onset, a “gene discovery” approach was used to identify new virulence-associated genes activated during brucellosis infection. In a pivotal study at UW, a laboratory methodology known as in-vivo-induced antigen technology (IVIAT) successfully identified novel B. abortus genes expressed during infection in elk. Some of these genes were also found to be common to brucellosis infection in cattle.

The IVIAT approach to virulence-associated gene detection was also used to identify similar virulence genes up-regulated during Yersinia pestis (plague) infection in different animal hosts indigenous to Wyoming, including prairie dogs, rabbits, ferrets, and coyotes. This classic approach to identifying molecule factors involved in bacterial diseases is simple in practice (albeit labor intensive), safe, inexpensive, and has a long-standing track record of success.

One mechanism for persistence of B. abortus in the animal host is likely due to suppression of the animal’s immune response to the microbial pathogen – specifically, inflammation. Reduction of inflammation by an innocuous Brucella enzyme, Mdh, was shown to affect the behavior of the first-line cellular defense mechanism in the mammalian host, namely macrophages (specialized cells involved in detection and destruction, among other actions, of bacteria and other harmful organisms). Although the data is not conclusive, strong evidence has suggested Brucella has evolved the use of several of its “housekeeping” enzymes and other maintenance proteins in facilitating its survival.

Since about 2009, efforts were undertaken to examine the feasibility of using such Brucella protein components, cloned, expressed, and purified from E. coli, and introduced into a variety of vaccine formulations.

These studies primarily used mice as a surrogate vaccine model to examine the clearance of the pathogen from spleen, lungs, and reproductive tissues from immunized animals after exposure to several different strains of the Brucella bacterium.

After numerous, time-intensive experiments, the results suggested the use of acellular (may contain cellular material but not complete cells) components of B. abortus may be usable as a suitable substitute for traditional live-attenuated (a live, but weakened, or attenuated, form of the bacteria that cannot cause disease, but can stimulate a strong immune response) platforms used in current brucellosis vaccination regimens. Subsequently, a UW patent was filed and accepted in 2014 for the continued use and development of these Brucella cellular components as potential vaccines and diagnostic targets.

More recently (2016), the efficacy of experimental sub-unit vaccine formulations in an immune pregnant mouse model has been evaluated against fully virulent Brucella abortus infection. Additionally, a pilot study in goats was undertaken. Both of these studies represented a collaborative effort with Richard Bowen’s (DVM) group at Colorado State University. While inconclusive, these experiments represented a step forward in advancing potential novel acellular vaccine candidates into applicable animal models.

Ambiguous outcomes have not thwarted efforts to continue with the identification of new virulence-associated proteins produced by the bacterial pathogen. In fact, species-distinct cell wall components have been identified at UW that may have potential in immunologic diagnostic assays. Variation between molecular components of the various Brucella species could lead to development of tests that differentiate between several different infectious species of the Brucellae. More importantly, these findings may contribute to increased specificity and sensitivity of a rapid field assay for B. abortus under development at UW.

While these tests are mainly serologically (blood)-based, another laboratory at UW is developing a DNA-based (PCR – Polymerase Chain Reaction) assay for B. abortus infection for cattle (led by Associate Professor Brant Schumaker, an epidemiologist and supervisor of diagnostic and regulatory serology at the Wyoming State Veterinary Laboratory).

Consistent with the past success of experimental sub-unit vaccine formulations against wild-type B. abortus infection in the mouse model, studies are being conducted in collaboration with the laboratory of Associate Professor Jeffrey Adamovicz (former department member at UW) at the University of Missouri, whereby selected vaccine candidates are augmented with immune-stimulating additives (CpG’s) to enhance protection against Brucella abortus in a mouse model.

The way the immunized animal is infected makes these experiments unique. Brucella abortus has a propensity for infection by multiple routes of exposure such as oral ingestion or inhalation. In particular, airborne bacterium are highly infective, requiring a very low number of bacterium to colonize the host when inhaled.

This condition may more likely represent the more natural route of exposure in the environment. Thus far, experimental results have demonstrated equivalent efficacy of sub-unit (a fragment of a pathogen, typically a surface protein, used to trigger an immune response) vaccine formulations against the parental (injection) and inhalation route of exposure to virulent Brucella.

Most recently, novel live vaccine platforms against brucellosis have also been explored at UW.

The probiotic bacterium (Lactococcus) has been examined for use as a “carrier” of Brucella genes to colonize the mammalian gastrointestinal tract and consequently immunize the animal host against Brucella infection. These ongoing experiments represent the potential for another alternative to the traditional live Brucella-based vaccine for cattle.

UW investigators have been negotiating the task of eradicating brucellosis in the United States for over 15 years. While the problem is not yet solved, the use of basic gene discovery approaches, combined with novel vaccine platforms, will facilitate a better understanding of the microorganism’s biology and may ultimately lead to the end goal.