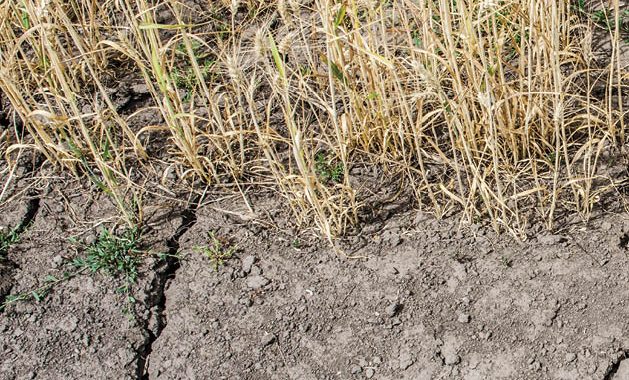 That, plus a kidney bean-shaped area from central Natrona County to southern Johnson, and – ironically – a rainbow-shaped area arcing from southeastern Washakie County to land in Hot Springs County, represents the first time since October 2018 the state has had areas branded extreme drought (bit.ly/wyo-drought-map).

Kelley has been meeting since June with state, federal and tribal organization representatives to compare draft drought map values with on-the-ground observations from extension educators, the Wyoming Agricultural Experiment Station and other agency partners. 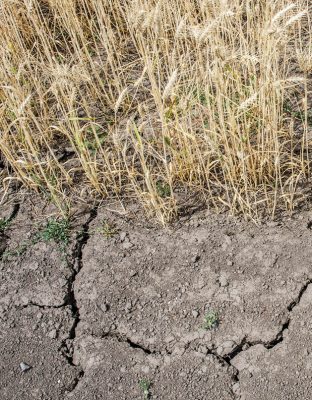 About 1 to 2 percent of the state was abnormally dry in late April. By the end of May, over 25 percent was either abnormally dry or in a moderate drought, she said.

“We started to hear about some of the impacts and conditions particularly in eastern Wyoming rangelands associated with the dry conditions,” she said. “From that, we said all right, let’s coordinate and ensure people know how to report on-the-ground conditions and impacts to ensure the Drought Monitor is accurate.”

The Drought Monitor documents what’s already happened and does not forecast conditions. Policy makers and others use the information to determine if, for example, agricultural producers might qualify for disaster response programs.

“Could someone go to a spot on the map and question the drought category?” asked Kelley. “Certainly, because maybe we haven’t received observations specific to that location. But based on the data available to us, combined with observations from the ground that we do receive, I think the map is as accurate as possible without more information coming in from the ground.”

Kelley said what category is designated for an area on the Drought Monitor map is relative to historical conditions. For example, if current conditions are severe enough that only 16 years out of the past 100 have seen worse, then it is classified as a moderate drought. Alternatively, if the conditions have only been worse in four years out of the past 100, then it is classified as an extreme drought.

Kelley said Drought Monitor authors review up to 50 objective data sets weekly in addition to observations submitted through the National Drought Mitigation Center’s Condition Monitoring Observation Report system (bit.ly/drought-condition-reports). The Drought Monitor authors create the map for all 50 states and territories based on the convergence of evidence from the many indicators and observations, she said.

Johnson County extension educator Blaine Horn has been clipping vegetative matter from 20 exclosures on a ranch south of Buffalo for the past 19 years. The exclosures are small, about half a meter square, and protected from grazing and other disturbance and reflect the amount of forage available. Almost all the grasses in the pasture are cool-season, getting an early spring boost from winter precipitation, but by early July growth ends as the plants have reached maturity.

The timing of and how much precipitation received in early spring usually tells producers how much forage may be available for summer grazing.

“The idea is to try to get a trigger date in the spring,” Horn said. “It’s best for a rancher to have a drought plan—the earlier the better.”

Horn clips the grasses to the ground, collecting the entire biomass, then dries and weighs what’s left.

“Our plants are hurting and even with good spring moisture they will not respond quite as well as they would if we’d gone through an average or close to average spring and summer,” said Horn, who provides updates to Kelley’s group. 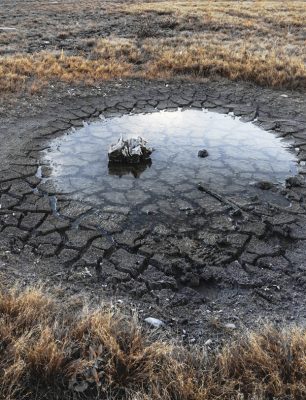 Rural regions are suffering, but urban areas are not immune from the effects, said Kelley. Increasing water temperatures coupled with less streamflow can affect fishing and other recreation.  Paltry snowfall at ski areas could cause that industry to suffer, and water from mountain watersheds feeds urban domestic water systems.

“Oftentimes, as we are seeing in parts of the West, with drought comes wildfire and if our mountains experience a wildfire within our watershed, that certainly can impact water quality,” she said.

Rain and snow could relieve parched rangelands across Johnson County and the rest of Wyoming, but if next spring is dry, “You need to be prepared for that,” Horn said. “Getting prepared for it now will make it a lot easier when you have to make a move next spring, if de-stocking or whatever.”

Navigating Drought in Wyoming was developed by UW Extension to help the agricultural community identify, prepare and negotiate drought impacts. The free publication is available in PDF, HTML or ePub formats at https://bit.ly/B1325.