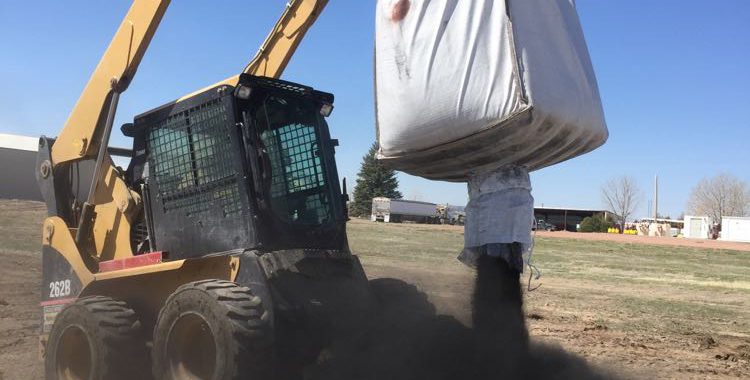 University of Wyoming soil science researchers are conducting preliminary tests of a coal-derived soil amendment that so far is producing results similar to another popular soil amendment, biochar.

The project is part of the Carbon Engineering Initiative in the UW School of Energy Resources’ Center for Carbon Capture and Conversion (CCCC). The CCCC is focused on supporting the future of Wyoming coal and creating nonenergy and fuel uses that create economic development and diversification opportunities.

The concept of coal-based soil amendments provides a new, nonthermal and a potentially high-volume use for Wyoming coal while promoting increased crop yields, improving soil fertility and retaining moisture in a sustainable way. A soil amendment is any material added to the soil to improve its physical or chemical properties.

Resham Thapa, from Pyuthan, Nepal, a Ph.D. candidate in the UW College of Agriculture, Life Sciences and Natural Resources, leads the project for his dissertation research. Sean Tang, from New Orleans, La., and Samir Budhathoki, from Dang, Nepal, both doctoral students in the UW Department of Petroleum Engineering, also are involved in the project.

“We are investigating the use of coal char as a soil amendment that has been produced from Powder River Basin coal and comparing its effects to conventional Wyoming agricultural practices — such as the use of more expensive biochar — to determine its viability as an agricultural product,” Thapa says. “Coal char and biochar are very similar in terms of weight, pH level, as well as other physical and chemical characteristics. We are excited to see if coal char performs similarly.”

The initial phase of the project began in a greenhouse study through the guidance of UW Professor Emeritus Peter Stahl. The greenhouse experiment examined plant growth and soil properties with both biochar and coal char in different soil types.

Pyrolyzed coal or coal char has many physical and chemical properties similar to biochar, a widely used soil amendment, Stahl says. Like biochar, coal char has the potential to enhance the water and nutrient holding capacity of soil. If this material proves effective at improving soil properties and plant growth in agricultural field trials, coal char may represent a new, high-volume use of Wyoming coal, as it would be applied to the fields at different rates, he adds.

With favorable results in the greenhouse, the team then scaled up the project to conduct field studies on sugar beet crops at UW’s Powell Research and Extension Center, and on field corn and alfalfa crops at the James C. Hageman Sustainable Agriculture Research and Extension Center near Lingle. Following the harvest in fall 2021, the team evaluated the crop yields and soil fertility properties of the various treatments.

“We observed the coal char noticeably improved organic content of the soil, where biochar did not to the same level,” he says. “We are very optimistic about using coal char as a soil amendment based on the positive organic matter and the soil health. It could reduce the use of chemical fertilizers due to possible soil nutrient holding ability, and it has the potential to yield healthy produce and protect the overall soil health for the future.”

The team also is gathering more data to determine the water holding capacity in both field and laboratory soil treated with coal char.

“It is possible coal char can reduce fertilizer runoff due to its high surface area and porosity, leading to improved nutrient absorption,” Thapa says. “The properties of coal char, such as high surface area, porosity and low bulk density, can help to aggregate the soil, reduce compaction and surface crusting, and increase water infiltration into soil.”

In addition to favorable plant and soil conditions, the positive economic implications of the product — the use of coal char — may be considerably cheaper than its biochar counterpart, Thapa says.

“We are developing a new market that is very important for the economics of Wyoming and other places with coal mines,” he says. “It is a cleaner use of coal, and our evaluations thus far show that, compared to the more expensive biochar product, coal char performs at least as well in certain soils or even better. This can be a competitive advantage of coal char.”

Richard Horner, UW’s CCCC director, believes this could be transformative for the coal mining industry.

“Our goal is to create new markets for Wyoming coal by growing the demand for coal as a feedstock that can be converted into chemical and high-performance engineered products having greater value than the (British thermal unit) component of the coal itself,” Horner says. “The initial market assessment and economic viability of coal char soil amendments confirm it can be made at a competitive price, and we are achieving successful results favorable for increasing the longevity of coal mining in Wyoming. This, in turn, supports the Wyoming agricultural community, which benefits from crop quality and yield improvements.”

The field demonstrations are considered an important baseline. It is expected that improvements to soil fertility and crop growth in the treated soil will occur over time, due to coal char addition. The team plans more studies and is gearing up to plant additional crops in the coming growing season, which will include working directly with the Wyoming agricultural community.

“We will collect data again in 2022 and 2023 and determine the effect of coal char and biochar,” Thapa says. “Based on the analysis from our first-year experiment, we will improve our initial design for the field study as well as collect the same data that we established in 2021 to compare in subsequent years. We anticipate that crops planted in these same plots next year may well show marked increases in crop yield due to the observed improvements in the soil condition.”

In collecting more data, the team will determine the optimum concentration of coal char for use in different soil types; the lasting effects on crops with single versus multiple applications; and the use of coal char used in conjunction with other fertilizers or enrichments such as Wyoming-sourced biomass, nitrogen or manure.

To learn more about the project, visit the CCCC website at bit.ly/uwyo-carbon-capture-conversion.

This story was originally published on UW News.