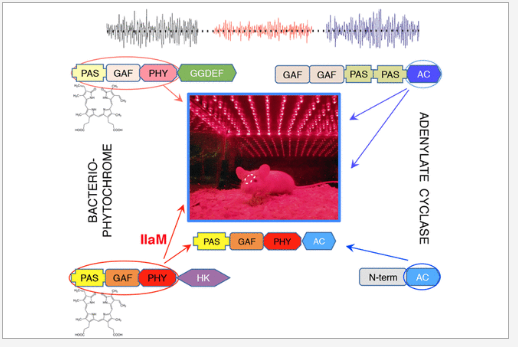 Strange things at the University of Wyoming, as one hears molecular biologist Mark Gomelsky talk about head replacements as routine laboratory procedures.

A little more conversation and things become MUCH clearer – bioengineering a protein.

Researchers took the head from one protein and put on the body of a different protein, allowing scientists for the first time to demonstrate near-infrared light can control a cellular process in a mammal’s brain.

More formally, he said the light-sensitive enzyme they engineered disrupted the flow of information from one part of a mouse’s brain to another when activated with external near-infra-red light.

“This is a really cool piece of work,” said Gomelsky, in the College of Agriculture and Natural Resources. His lab worked with collaborators from the Department of Zoology and Physiology at UW.

“Engineering Adenylate Cyclase Activated by Near-Infrared Window Light for Mammalian Optogenetic Applications” was published May 30 in the American Chemical Society’s journal ACS Synthetic Biology. The paper can be read at bit.ly/infraredcamp.

The lab’s result is a long-held dream of engineering an enzyme that can make cAMP when irradiated with near-infrared light because such light can be delivered with spatial precision and for a specific duration, said Gomelsky.

The key is that external near-infrared light penetrates several centimeters deep through human flesh and bones, he said. In this research, the light penetrated the mouse skull and brain tissue.

“Because cAMP controls various processes dependent on the cell type, this enzyme can be used to turn on production of insulin in pancreatic cells, send electrical impulses to the heart pacemaker cells and even stimulate fat burning in fat-storing cells,” said Gomelsky.

The Gomelsky lab’s first protein prototype failed in mice because it was made from bacteria that cannot grow at 37 degrees Centigrade (98.6 Fahrenheit). The second prototype failed, too.

“It took us quite a while to find the proper ’body parts,’ or protein modules, that are stable and active at mammalian temperatures,” Gomelsky said. “This paper describes the success in finding those bacterial protein parts, and Anastasia Fomicheva, a Ph.D. student in my lab, made these parts work together.”

“We are basically taking the body of one (light-sensitive) protein and the head from another protein (adenylate cyclase) and putting them together to produce a functioning chimera, akin to a sphinx with a lion body and a human head,” he said. “That’s perhaps a crude analogy, but I like it. It illustrates the scope of the challenge. Enzymes are not readily amenable to such drastic manipulation.”

To test whether the engineered enzyme can be activated by external light in a live mammal, the lab turned to collaborator Professor Qian-Quan Sun in the Department of Zoology and Physiology, who studies mouse neurobiology.

Memory formation in mice and humans is one of many processes controlled by cAMP, said Gomelsky. The transfer of information from short-term to long-term memory shows up as electrical spikes, called spindle waves. Electric currents are initiated by specific ion channels and are transmitted through neurons from one brain region (thalamus) to another (cortex).

If a gene for the light-sensitive enzyme were delivered in the brain region where the spikes originate, the near-infrared light would stimulate the production of cAMP, which would open ion channels and disrupt the electrical circuit. That was the prediction.

Graduate students in professor Sun’s laboratory placed the gene into the brain of a mouse and used a hand-held, near-infrared laser to turn on the enzyme while the mouse was sleeping.

“One of the students, Chen Zhou, measured the spindle waves in these mice and saw them decrease when a mouse head was irradiated, like we predicted,” said Gomelsky.

Emmanuel Tzanakakis, a bioengineering professor at Tufts University, is testing the engineered enzyme in insulin-producing cells in mice. Gomelsky said collaborators in Germany are looking at whether the light-activated enzyme can be used to stimulate fat degradation.

Meanwhile, Gomelsky’s lab is working to improve the protein.

“We made a great tool but still fairly crude,” he said. “We need to optimize it to ensure the head communicates well with the body of the protein.”

Gomelsky also works on modifying the protein to make another important signaling molecule in mammals, known as cGMP.

“It’s a one-letter change in the name but a big change in the protein,” said Gomelsky. “cGMP is not quite as omnipresent in cells as cAMP but is very important.”

He commended contributions of two Laramie High School students working in his laboratory on this project, Aru Nair and Alhena Islam, described by Gomelsky as talented and tenacious.

Nair won this year’s Wyoming State Science Fair and took first place at the International Science and Engineering Fair sponsored by Intel. Nair was also invited to present at the Army Science and Technology Symposium and Showcase in Washington, D.C.

Islam was second in the Wyoming State Science Fair and received the Outstanding Promise Award at the Junior Science and Humanities Symposia competition this year in Albuquerque.