For two days in Thermopolis this month a fifth H was added to the 4-H’s of head, heart, hands and health.

Young Kayden Light spoke softly to her horse, Julie, too quietly for an interloper to hear the words in the wood stall the beginning of the second day of 4-H Horse Camp at the Hot Springs County Fair Grounds.

Light’s baseball cap just fit under the crook between Julie’s head and neck. Light, standing to Julie’s left, reached high and slipped one half of the halter over Julie’s right ear, then the left ear as Julie slightly cocked her head to the right – was she helping? – giving Light easier access to fasten the halter. Light opened the stall gate, and the two classmates stepped out for the second day of schooling.

Near the end of the day before, long-time 4-H horse club leader and instructor Stuart Thompson of Sublette County described why training horses and humans is different than humans training dogs; humans ride horses – and a human’s brain is communicating with a horse’s brain.

“This is the only sport where we have two brains that need to get coordinated to get the result we like,” he said. “And this is the beginning of that for these kids. The first thing we try to get across is the partnership between the horse and human brain.”

There is no quick path. “We are accustomed to instant gratification,” Thompson mused, citing the world of smartphones and video games. “Horses are not instant gratification. It’s time, and time on task, time in saddle, and it’s learning that never stops and developing that partnership.”

“Their relationship with their horses teaches the 4-H’ers their belly button is not the center of the universe,” he said. “The horse is. They have to learn to feed and water the horse, take care of them before they feed and water themselves. There is another life they are responsible for.”

More than 55 4-H’ers and their horses took part in the two days of the camp. 4-H’ers have to turn 9 this calendar year to participate, and 4-Hers are split into juniors, intermediates and seniors .

4-H’ers are divided by age, then split into groups depending upon their ability levels, to start the camp, said Amanda Kauffman of Buffalo. She’s retired from ranching, but she’s attended the annual horse camp for most of 40 years, starting about the time when Americans were taken hostage in the American Embassy in Tehran and the launch of ESPN.

She allows she may have missed a couple camps – but not many.

“I really like working with the kids,” she said. “I’ve ridden all my life. It just gives me a thrill to share what I know with them. Horse camp is such a fun thing for the kids.”

They’re laughing, smiling, riding and happy, and, “They are learning things they didn’t think they could,” said Kauffman, who leads a program for horse project 4-H’ers in Johnson County. There are up to 30 4-H’ers in it. “For example, many of these kids have never loped before.”

Loping is awkward because the body is in an insecure position on a horse, she explained. “But they probably will lope before they go home. And you’re just like cheering. You see the improvement. It’s just exciting for them.”

University of  Wyoming Extension equine specialist Jenny Ingwerson along with volunteer instructors and helpers in the arena showed 4-H’ers how to maneuver their horses and then had the 4-H’ers do it. The sun had dried the arena dirt dry, and dust sometimes obscured the riders as they came up to speed in the arena.

“We are so lucky to have Jenny,” said Kauffman. “She is a superior teacher, and she’s trying to build an equine program at UW. That would be nice. There is a big demand for it, and it’s a huge industry. Everybody seems to have a backyard horse, and then some.”

Ingwerson joined the animal science department at UW in 2014, and this was her fifth camp. Her approach has been to draw upon her own childhood and horses.

“I didn’t get to start with a nice, quiet horse,” said Ingwerson, who grew up in Plattsmouth, Neb. She participated in 4-H, open and quarter horse shows. “So when I see kids who have challenges with horses, I know exactly what they are going through.”

She even had trouble getting the bridles on  because she was so little, and her horses were young and not always willing.

“A young rider on a young, inexperienced horse is rarely a good combination,” said Ingwerson.  “The horse and I were always learning together. I never had a horse I could learn from, and that’s a challenge.”

Safety is always the first priority, she said. That enables the 4-H’ers to advance to other levels.

They have more fun if they learn how to work with horses and become more safe, said UW Extension educator Scott Cotton and one of the instructors.

“If these kids go through step-by-step on how to work with horses and become more safe, they have more fun,” he said, “and when they come to other events, like horse shows and fairs, they’re the ones in the arena who are not a problem for anybody.”

“On top of that, the horses are reading them and listening to them,” he said.

This was the first year the event was not at the state fairgrounds in Douglas. There are two one-day camps this July, one in Sundance and the other in Cheyenne, but this is the only two-day horse camp. 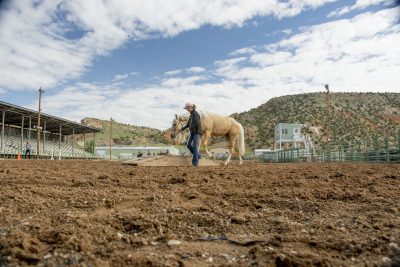